From the archive: The Andy Rooney Story (From 2011) 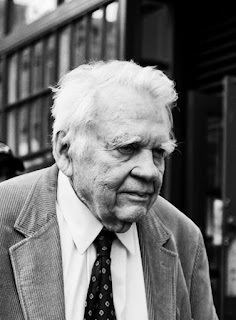 (Originally published on Nov. 6, 2011. I actually don't watch "60 Minutes" anymore and this isn't nearly as interesting a story as it seemed 11 years ago. But here it is for posterity or something. -Ed.)

Andy Rooney died yesterday. He was 92. I’ve been watching CBS' "60 Minutes" for as long as I can remember. My parents would always put it on every Sunday which was usually dinner time in my house and that generally meant that I watched it too. Rooney didn’t begin his show-ending monologues until 1978 when it replaced the Point/Counterpoint segment featuring Shana Alexander and James Kilpatrick. I didn’t take much notice of Rooney until I was a teenager in the 1980s and had taken an interest in writing and journalism and harbored dreams of being a newspaper opinion columnist. Rooney personified the folksy, grumpy, common-sense curmudgeon and could make you roll your eyes, but I guess I found something about him to like and stuck with it.
In the years I watched him hold forth on subjects as varied as chairs, the Super Bowl, the job of the US Presidency, umbrellas, ice cream cones, barbers, and the random items found in people’s backpacks, I had always wanted him to do a segment on books.

It seemed an obvious Rooney segment. He had always sought to make a larger point about something small from his own experience, I just knew that one day he would finally get around to giving TV viewers a tour of the bookshelf behind his desk. Years passed, and one grumpy segment followed another. It never came, and yet my curiosity persisted. Finally in 2007, working late one night in my office at BusinessWeek I wrote a short email to 60 Minutes with the subject line “For Andy Rooney”:

I’ve watched your segments on “60 Minutes” every Sunday since I was a young kid. I didn’t always get what you were saying, but I got enough to know that I liked you. It probably had something to do with me getting into the media business myself.

All these years you’ve talked about the silly things that people send you, your junk mail, the mess on your desk, the stuff you find in your attic and other curiously revealing trivia. But I’ve always wanted to know more about what we see in the background behind you every week: Your bookshelf.

When I visit someone’s home I sometimes find it interesting, if I can do it politely, to peek at what’s on their bookshelf. You’ve been inviting me and millions of other people into your office for years. As someone who like you, values the written word and the simple pleasure of reading a great book, I’m curious about what’s on that bookshelf of yours and why. I doubt it’s junk, and I’m certain it would be revealing. How about a little tour?

I’m certain Rooney never read that email, and though I can’t prove it, I’m betting it got passed to a CBS producer who did. Because two months later, Rooney closed the April 22, 2007 edition of 60 Minutes with a segment that included a few of his favorite books. They were: three dictionaries; a heavily used edition of Modern English Usage by Henry Watson Fowler; Walter Lippman’s A Preface To Morals; four leather-bound volumes by Charles Darwin; and the fifth edition of The Modern Researcher by Jacques Barzum and Henry Graff, also heavily used.

Over the years of watching I had noticed two others. One I recognized because I own it, and one I recognized because I knew of it. The one I own, and which is plainly visible in Rooney’s final commentary is The Good Times, a memoir of Russell Baker’s years as a reporter for The Baltimore Sun and columnist for The New York Times. It is often neglected in favor of his better-known personal autobiography Growing Up. The other, which I know by reputation is Words on Words by the late, legendary journalism professor John Bremner.

Two years later I got the chance to meet Rooney. The occasion was the 2009 Deadline Club Awards dinner at the Waldorf Astoria Hotel in Manhattan. I was a finalist in the science and technology reporting category, for a series of stories I wrote for BusinessWeek.com called “Unconnected America,” which examined how the lack of access to broadband Internet connections affected people in various walks of life and in different places. I lost out to a Time Magazine cover story, “The Clean Energy Myth.”

There was, before the banquet, a cocktail party lasting an hour or so, and Rooney happened to be there. And I noticed that my then-colleague, BusinessWeek writer David Kiley was talking to him rather enthusiastically at a set of chairs surrounding a table as if he knew him well. It turns out he did, so I ventured over to where they were sitting and waited for a chance to introduce myself.

It came. I told him about the letter I had written him and before I could get to the part of his segment on books, he cut me off.

“No, and I didn’t expect you to,” I said. Then I told him about the segment on books, and that I had always been curious about them because I had been watching since I was young.

At this, he got a little indignant. He called across the table to a female friend he referred to by her last name — I didn’t catch it. “You’re really 39? Hey, do you believe this guy is 39?” he said to her.

“If he is he’s very lucky,” she said to him and grinned at me.

Then he looked back at me. “Well, you look older.”

The Power Grid Failed for a Few Hours on Sunday. Here's What Happened. 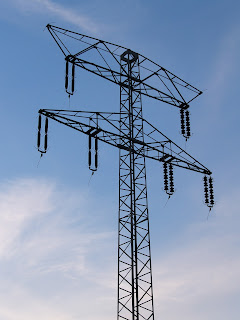 On Sunday a little after 2 PM I had taken my daughter out for a lunch of grilled cheese sandwiches when my wife texted: "The power just went out."

The power has "blinked" a few times during the night in recent weeks. We notice when certain appliances in the bedroom light up after coming back on. It's annoying, but not so frequent as to rise to a serious problem. I thought this might be another instance of that. It wasn't.

At 2:21 PM our local utility Central Hudson Gas & Electric Corp. (CenHUD) texted to inform us that "We believe there is an outage" affecting our address. The message estimated that 608 customers were without power at that moment and that it was expected to be restored by 5:30 PM.

My daughter and I finished our lunch and drove home. My outdoor lights — both at the front porch and outside the garage doors — were lit. And inside, my wife was watching TV as if nothing were amiss. To her nothing was. Yet there was no indication from CenHUD that the power outage had been fixed. 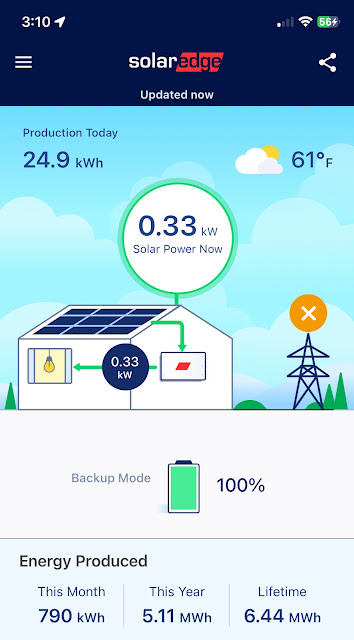 I opened up the SolarEdge monitoring app on my phone and saw the information displayed at the left. It showed that my solar panels were generating 330 watts of power, all of it flowing directly to my house. The TV was working normally as were the cable modem and Wi-Fi routers that supplied it with content. Lights came on normally in the bathrooms and the kitchen. Had I not received the text message from CenHUD, I might have been unaware there was a problem with the power grid at all.

As far as I could tell, all the power we were using at that moment was coming directly from the roof panels themselves, and nothing was coming from the battery. I explained all this to my wife, who was suddenly rather impressed. In the months before we signed the papers to install the panel-and-battery system I had made myself something of a pest on the subject of solar power. Now it was paying off. As the implications of the moment dawned on her, she slapped me a high five.

I settled into my office to watch an MLS Playoff game on my iPad. My daughter watched a movie in the family room. Life proceeded as normal.

While I was watching the game, I kept an eye on the SolarEdge app an outage map that CenHUD had provided.

The estimated number of affected customers grew to about 1,000 and the estimated time to resolution went from 5:30 PM to 6:30 PM. No explanation for a cause was given, but it was likely routine. A faulty line or a blown transformer.
But I started to wonder what might happen if the outage dragged on into the night. Saturday was a sunny day that started cold with temps below freezing but ended in the mid-60s. The sun was due to set just before 6 PM. If the outage were not resolved, we'd be running on battery power, something we've yet to experience.

Fortunately, we didn't have to find out what it's like on battery power. CenHUD corrected its outage on schedule and our connection resumed before sunset.

I went back into the monitoring app the next day and looked a little more closely at the data.

It's clear from the data that prior to the grid failure, the panels had been producing substantially more power than the house was consuming at the time. And in fact, had we upped our consumption, say to bake a cake, or had we wanted to turn on the air conditioning, we would have been fine to do so. 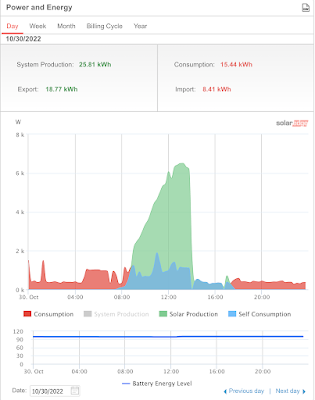 Since it was a sunny and clear day, at the moment of the grid failure, the panels had been generating 6.2 kWh worth of power, and through the inverter, exporting most of that externally to CenHUD. Our consumption at that moment was less than 1.2 kWh. What I think happened is that when the inverter temporarily lost its connection to the grid, it simply stopped sending out that excess power.

Obviously, we were lucky that this outage happened on a day with sunny conditions. Power grids fail during severe weather events all the time. Part of my calculus in adding the solar panels and the battery has been to hedge against these moments and improve our chances of easily lasting through these moments with an easy source of power plus battery backup. And I don't expect everything to work as it did on Sunday. I've been told that when running on all-battery power during the night, we'll want to be careful with our consumption, and avoid high-consuming activities. But as yet I've no experience against which to gauge that advice.

Meanwhile, I have an update on October's performance. For the entire month, we produced 811.87 kWh against total consumption of 515.48, leaving us with a production ratio of 1.58, which is both higher than I reported here on Oct. 19 and also higher than the level of 1.25 I recorded for the month of September. I had hoped to finish with that ratio above 1.6, and before some rainy days last week, it had indeed risen above that level, only to settle lower.

I exported 570 kWh or 70 percent of the total amount produced, and that added up to more than twice the 274 kWh I imported from CenHUD's grid. Overall I produced nearly half or 47 percent of the power I consumed and imported 53 percent. And despite Sunday's brief outage, usage of the battery remained at zero.

I still haven't seen a bill from CenHUD against which to compare these results, though one is expected any day now. That will be the subject of my next post.
at 11/01/2022 03:43:00 PM No comments: