It's been four months since my solar system was installed. Here's how it's going. 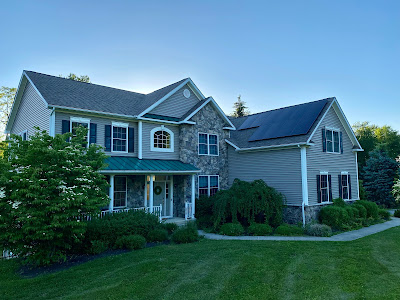 The system went live during the mid-afternoon of June 17, which means that as of this writing, I now have about four months of operational data upon which to draw some early conclusions.
First, let's start with the big numbers. In four months, the system has generated 4.81-megawatt hours of power. During the same period, my house consumed 6.42-megawatt hours. Conclusion: In four months I generated 75 percent of the power I consumed. So far so good.

But there's more to understand. During the summer months, I was running the air conditioning, and on some days the pool heater. AC use was fairly constant throughout the summer. The all-electric pool heater, I quickly learned from watching the data in the tracking app provided by SolarEdge, the manufacturer of the basement inverter, raised the overall electrical demand significantly when it was in use. Below is the graph for July's consumption (red) and total production from the solar panels (green) and self-consumption (blue). 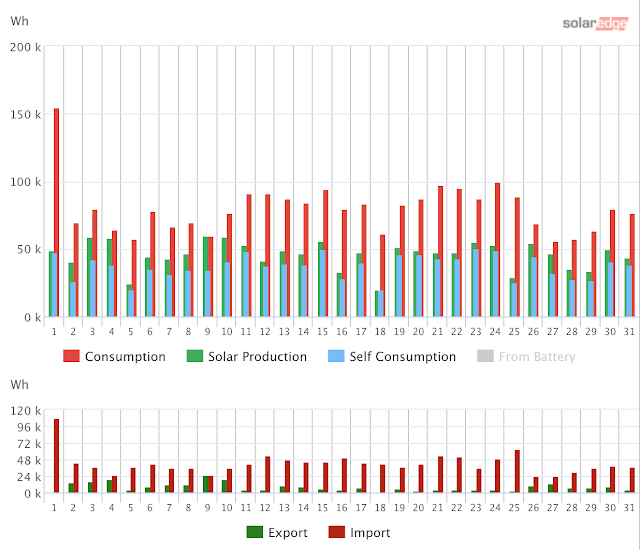 As you can see, the pool heater was running full blast all day on July 1 and not as much during the majority of the month. July was hot, and once the water in the pool reached its desired temperature, it didn't require much effort from the heater to keep it there. I also made a determined effort to keep the heater turned off during the month because I was a little surprised at how much power it consumes. All in, during July, I produced a little more than 57 percent of the power my house consumed. In August, that figure rose to nearly 63 percent.

And then came September. It was cooler than expected and despite several days with temperatures in the mid- to high-80s, the overall need for air conditioning declined, as did the desire for comfortable water in the swimming pool. We had it closed for the season on Sept. 15 and rarely turned on the AC to cool the house. Data from SolarEdge shows that my system produced 1.02 megawatt hours against consumption of 821 kilowatts. In short, I produced 1.25 times the power I consumed. See the graphic below. 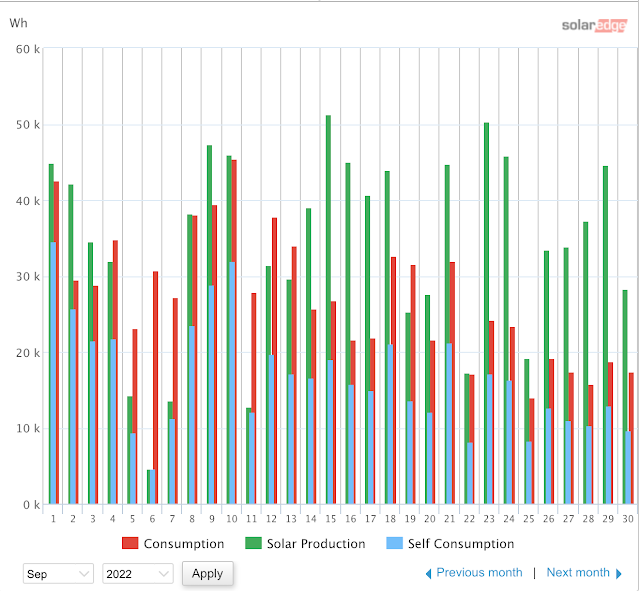 This aligns with an early hope I had for the system before it was installed: That New York's sunny but cooler days of late summer and early fall would work to our advantage. I was right. October has been even better: As of today, the production-to-consumption ratio has risen to 1.55 with more than two weeks to go in the month.

I'm curious about production during the winter months. For one thing, the days are shorter. The sun hits the panels progressively later in the morning and leaves them earlier in the evening. It's worth comparing a productive day from June to one in October. 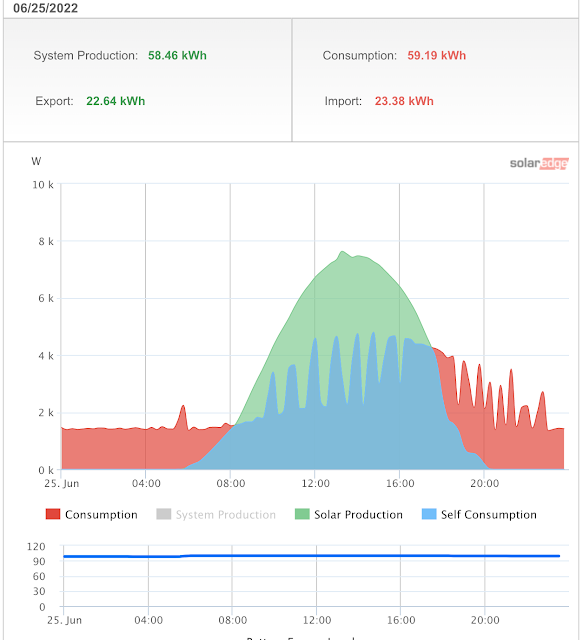 This graph is from June 25. The panels first begin to produce at about 5:45 AM, and did so consistently until about 8:15 PM. The pool heater was off, but the AC was cycling on and off, as evident from the red spikes in consumption. This was the most productive day in June, incidentally, and it ended just short of breaking even against overall consumption. For the record, the official sunrise occurred at 5:22 AM while the sunset was at 8:33 PM.

Now take Oct. 6, which is pretty close to the most productive day I've experienced so far this month. 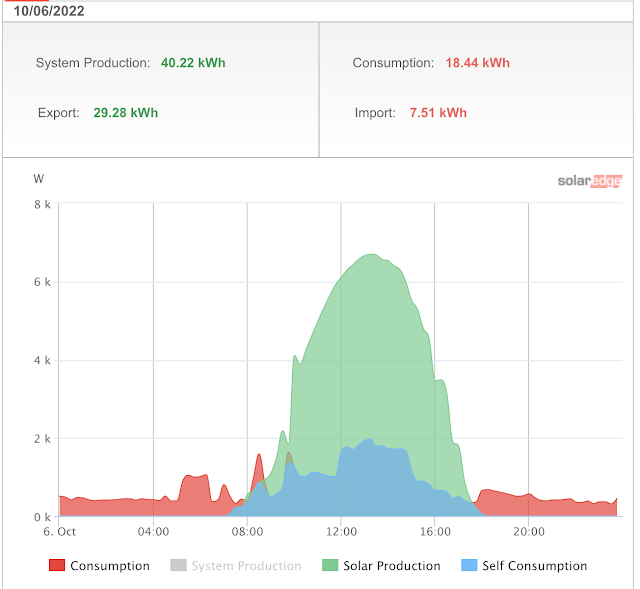 As you can see, the system produced more than twice what the house consumed, but its window of production was more than four hours shorter, starting at about 7:15 AM (official sunrise 6:57 AM) and ending shortly after 6 PM (official sunset, 6:29 PM). Obviously what I'll be watching is how the shorter days of winter narrow that production window even further. And then there's snow to consider: Panels that are covered in snow can't produce electricity.

There are also a few other things I have yet to fully understand: How does exported power affect my utility bill? The green spaces in the graphs indicate when the system is producing more power than the house is consuming. That power is then "exported to the grid," and the numbers on my utility meter run backward. I've been photographing the meter readings several times a week to track the progress and can confirm the numbers are somewhat lower now than they were from their late August peak. But I don't yet fully understand how this affects my bill, in part because I'm now billed on a bi-monthly and not monthly basis. I'll write more about this as the puts and takes clear up. But overall I'm liking what I see.
at 10/19/2022 08:53:00 PM