The Money Post: What's Included in my Solar Power System, and What It's Going To Cost

The papers are signed, all the arrangements are made, and the contractors arrive this week to start installing things on my roof, in my basement and on the outside of the house.
This, as they say, is the moment when the rubber meets the road, or in this case, my wallet.

When you start a conversation about getting a solar power syste, the subject turns quickly to overall costs and the break-even point. So let’s start at the top line and with the big number: 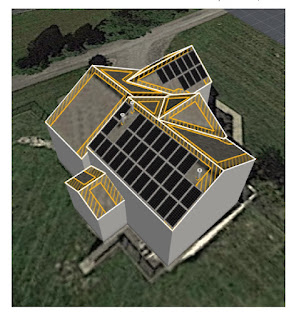 •39 REC Alpha 395 Pure modules: These are the “panels” that will be visible from the roof. They’re rated to produce up to 15,405 kilowatt hours per year, which as I wrote previously, works out to a little more than what I think my average annual electrical consumption is. The end result: I think I’ll have the capacity to produce more power than I use, which is important for reasons I’ll get to later. Each module will have a rack to attach it to the roof.

•Two SolarEdge SE10000H-us inverters: These are central to the system and will be mounted on a wall in the basement near the circuit breaker box. Basically, the panels produce DC power. The inverters convert that DC power to AC. They also optimize consumption, manage the export of excess power produced to the external utility grid, and serve as a connection to the backup battery. It also enables remote monitoring and management, so I can keep track of what’s going on with the panels — Are they producing? Are they damaged? — via a mobile app.

•One LG Chem RESU16H Prime backup battery: Also installed in the basement, this will store power generated by the panels. And when the utility grid fails, as it occasionally does, we’ll have enough power to keep the lights on until either the sun comes up or the grid comes back. The battery adds about $15,000 to my gross up front cost.

Here’s how much I’m getting in tax credits: A rebate worth ~$18,000 or 26 percent from the federal government and another worth $5,000 from the state of New York. The federal rebate declines to 22 percent next year and expires the year after that.

Plus I’ve applied for block grant incentives from a state based-program called NY-Sun which will offset another ~$7,700 at a rate of 50 cents per watt.

All of the incentives will go straight to the vendor, who has handled all of the paperwork and filings. And when I file my taxes next year, I’ll have a few more forms to hand over to the accountant, but that’s about it.

A few details about the financing: I had to join the Clean Energy Federal Credit Union to apply for a loan for the above amount. It’s a 20-year loan, but realistically I’ll pay it off within 18 months. But in order to be eligible for membership in that credit union and apply for the loan, I had to first join the Northeast Sustainable Energy Association which has a $75 membership fee. This was an odd step, but I didn’t mind it.

All in I’ll be paying about ~$39,500 to get the system installed. When it’s installed and running, I’m expecting to pay a fixed fee to my electrical utility for the life of the system, one that is far below my current average monthly electrical bill, which is running about $300 a month, sometimes higher, sometimes lower. It should also remain the same as electrical rates rise which I expect they are likely to do given the volatility in energy markets of late.

Once the system is running I’ll be watching both the production and utility bills pretty closely for a few months. If my assumptions are right, after you take out the additional cost for the battery, my accountant says I should expect to break even within nine years. By that I mean the amount of money not sent to the local power utility will add up to the same amount I would have paid. I think I can reach that point in seven years. Meanwhile, the investment in the battery is a hedge against grid failures.

We’ll get a good test of my assumptions right away. Summer is here, and the air conditioner and pool heater will be running from June until late September. Last year’s electrical bills, which were our first since buying this house, came as a bit of a shock compared to those for a city apartment. If the summer is anywhere near as sunny as last year if we might end up seeing a benefit right away.
at 5/16/2022 03:37:00 PM No comments:

Note: I wrote this in 2008 and happened to mention the story again on Twitter today. I've edited it a bit but it's more or less the same. I've since seen Charles Lloyd perform live about a half dozen times, and even told him the cold pizza anecdote after introducing myself following a performance in New York. He laughed. -aah

One Friday night 14 years ago I became a jazz fan for life. I was a newspaper reporter in Idaho and was paid so poorly that I supplemented my income by delivering pizza in my pickup truck on weekends.

The good part about this was that I had a good stereo, and could pick up a good public radio station out of Salt Lake City, KUER, which at that time played a lot of jazz.

Someone got a cold pizza one day because of Charles Lloyd. At the time I was just barely learning about jazz and didn’t yet know what I liked, what I didn’t like. Yes I knew that I liked Miles Davis’ “Kind of Blue” because that’s very often the record that people who are curious about Jazz start out with. Same for Dave Brubeck’s “Time Out.”

So I was making a delivery and was compelled, literally compelled, to pull over. Something about what was playing on the radio had captured my attention, and there was no way I was going to let anything, not even a pizza delivery interfere with it. It was a long tune, and I realized it had been playing awhile and had a distinctive captivating beat, and a lot of interesting things going on with the saxophone, the piano, and the bass.

What had captured my attention so strongly was Charles Lloyd’s live epic from Monterey in 1966, Forest Flower. It was extraordinary. Have a listen:

I didn’t really know what it was I was hearing, but I knew I was hooked on this thing called Jazz that had been sort of burrowing its way into my psyche off and on since high school. This music became my link to the outside world of culture and art and intelligence and thoughtfulness during a period when I lived in a place that valued none of those things. I loved the spontaneity, and the fact that Jazz is an improvisational art appealed to me. It was never the same thing twice, and it could never be exactly the same for two people.

As I went on to become a Charles Lloyd fan and to collect many of his records, I learned the Forest Flower is, like “Kind Of Blue“ and “Time Out” are for Miles Davis and Dave Brubeck, merely an entry point. The song, all 18 minutes of it, is actually two tracks, one entitled “Sunrise,” the other “Sunset.” It was a popular crossover hit in the 1960s with the psychedelic set and sold a million copies, and made Charles Lloyd a celebrity.

Over the years I picked up his other records. From the 1960s there are albums like the poppy “Love In“ and “Dream Weaver,” which includes its own epic tune, the 12-minute “Meditation, Dervish Dance.” Like “Forest Flower” it has own hypnotic piano solos. As such listening to mid-1960s Charles Lloyd albums also provide the service of creating an entry point to the work of pianist Keith Jarrett.

But it was Lloyd's later records that went on to capture my imagination as my fandom grew more sophisticated. "Canto" from 1997 had me at the first few notes of the opening track. In 2000 came "The Water is Wide"

I made it my business to learn more about Lloyd, and to see him perform live. I learned that at the height of his fame he stepped away from performing and went into a period of solitude. He played with The Beach Boys. He allegedly played the flute on a few Grateful Dead recordings. And, over the summer he played a concert in New York. I was there, as was a reviewer for The New York Times.

It was a transformative experience, the sort of performance that made you want to be a better person, that made you want other people to understand that music shouldn’t always be something you turn on to fill the silence in the background when you do other things, but that it should move you and make you wish for more art and beauty in life.
He delivered a few monologues on his years here playing in Greenwich Village, in his rapid-fire Tennessee drawl, part beat poet, part minister, part cultural historian. The concert opened with a poetry reading by Charles Simic, then the Poet Laureate of The United States. Obviously once moved by Lloyd’s music as I was, he memorialized his flute-playing in a poem called “Two For Charles Lloyd,” describing “the mystery of this moment, the sudden realization that we have a soul.”
He ends with the lines: “‘Sweet Georgia,’ I hear someone whispering. ‘Without this music life would be a mistake.’”

After the show, I walked up Central Park West a little speechless. It was a hot summer night, and while it seemed a shame to go home and call it night. The musicianship and artistry of Charles Lloyd was a hard act to follow. I was changed by the warm wail of a saxophone and the delicate breeze of a flute.

I snuck a recorder into the performance, but it didn’t work out. My recording wasn’t very listenable. Fortunately, someone captured a soundboard performance of a July 4 show in Vienna, only three days later, which I obtained from a file-sharing site. I'll add a sample or two tomorrow. For now, here's a YouTube clip from another performance on the same tour.