Another trip into the archive: My First Apple Story

As of this writing, I’ve spent more time than many in the tech media covering at least some aspect of the Apple beat. This has not always been something that reporters would covet in the manner they do today.

For a few months in 1998, I worked briefly for Internet World, a weekly trade newspaper covering the Internet industry. (Yes, it was a newspaper that covered the Internet…. Don’t start….) It was owned by Alan Meckler’s MecklerMedia Corp. which has after numerous corporate contortions survived inexplicably to this day. The publication didn’t.

The summer Macworld conference was taking place in New York that year, and I lobbied successfully for the assignment to cover it. It was easy: No one else wanted to go.

At a time when Apple is now the largest company in the world by market cap, it may be hard to remember, but in 1998 the only stories anyone seemed to want to write about Apple concerned the corporate death spiral it seemed only to be delaying. The notion of a journalist who covered Apple full time, now a plum assignment at several tech and business publications, was limited to perhaps the local newspaper in Apple’s hometown, and a handful of enthusiast magazines.

Nineteen ninety-eight was another of the bad years for Apple. The best indicator of just how bad was its share price. After adjusting for stock splits over the years, Apple shares were trading at $1.036 a share as the month of July began in 1998. [Update: As of 2022 the split-adjusted price in July 1998 was about 26 cents. -Ed.]

The summer before, Wired had published its "Pray" cover (at right) containing 101 suggestions for saving the company. It was low on cash, suffering under the domination of Microsoft Windows, and the conventional narrative about its future was not so bright. 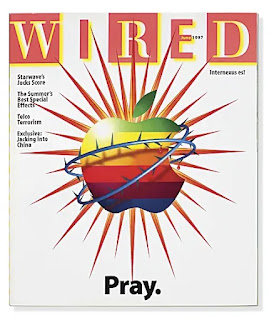 This was the day that history began to turn Apple’s way, and I was present when it happened. From the stage at New York’s Javits Center, Steve Jobs first showed the world the iMac. This was the first computer of that name — the brand survives to this day — and in many ways was the product that saved Apple.
It was a colorful desktop machine — Bondi Blue — and controversial in many ways. It had no floppy disk drive. It was the first computer to use the Universal Serial Bus (USB) port that is so common on PCs and Macs plus so many wall sockets and cars today. None of the uglier and more conventional connection technologies were present. This too was controversial.


In time the iMac would evolve. It would gain more computing muscle, several iterations of colors, and more radical physical designs. The product was one that bought Apple the time it needed to figure out what it was going to do next. A little more than three years later, in the fall of 2001, we learned what that would be: The iPod. Six years after that came the iPhone. And three years after that, the iPad.

Below is a video of the Steve Jobs keynote from that day. After that are two versions of the story I filed on the day’s proceedings. One was for Internet.com, the online outlet of the print publication. (An archival version without my byline can be found here.) Seven days later came a print version that ran in the weekly newspaper at the bottom of page 8 of a 74-page issue, which is also embedded below.

I of course went on to find a more interesting professional setting and parted ways with MecklerMedia within a month of publishing these stories. For a short period, I found freelancing for Wired News more lucrative. But before the year was out I had landed a staff job at Electronic News covering the chip industry at another historically critical period, which in turn led to jobs at Forbes, BusinessWeek, AllThingsD, and then Recode. By 2005 I had taken over a dormant column at BusinessWeek entitled “Byte of the Apple,” a bi-weekly meditation on all things Apple. Among its readers was Steve Jobs, who would occasionally call or email when he read something he liked or more often when he didn’t. That is another story.

[July 8, 1998 — New York City] Apple’s interim CEO Steve Jobs surprised the crowd at MacWorld Expo by showing up in person, not via satellite as was originally planned. And he brought news that seemed to hearten the crowd of Macintosh faithful.

The undisputed star of the show was Apple’s iMac, the eye-catching translucent desktop model set for release on Aug. 15. Jobs said the machines will ship with 56 Kbps modems, not the 33.6 Kbps modems that had been originally planned.

It was at this same conference in Boston a year ago that Jobs first announced what some Mac users likened to a pact with the devil, a software development alliance with Microsoft. That feeling was evident today, but to a lesser degree as Jobs was hissed as he mentioned Apple’s plans to bundle Internet Explorer and Outlook Express with the iMac.

“I use IE and I like it,” Jobs said. “You can make your own choice, and choice is good don’t you think?” he said as the crowd applauded. Indeed, two other presenters, Apple vice president for worldwide marketing Phil Schiller and Richard Wolpert, president of Disney Online, mentioned IE as their “browser of choice” during their segments of the keynote address.

Microsoft, seemingly determined to win more friends among the Mac community, did not come to the show empty-handed. Ben Waldman, Microsoft general manager for Macintosh products, announced a Mac-specific upgrade to its browser, Internet Explorer 4.01 that will be bundled with the iMac.

New features include Web archiving, and the ability to save the content of a Web site for offline browsing. A new tabs feature will allow users to keep the results of their Web searches on sites like Yahoo, Excite, Lycos and Infoseek, in their browsing window simultaneously with the content of the pages they select from the results.

Schiller introduced a new Internet search feature, code-named Sherlock that will be included with the release of Mac OS 8.5 set for later this year. Enhancing the current “find file” menu item, the new feature will search on the Internet via several search engines, including Alta Vista, Excite, HotBot, and Lycos as well as Apple’s Tech Info Library.

At the show, Disney’s Wolpert announced that its Blast Online will be available to Mac users for free during a preview. Previously, Mac users could not access the service that is geared toward children. Once the test ends, at a date to be announced, the subscription service will be offered at the rate of $6 a month or $40 a year. 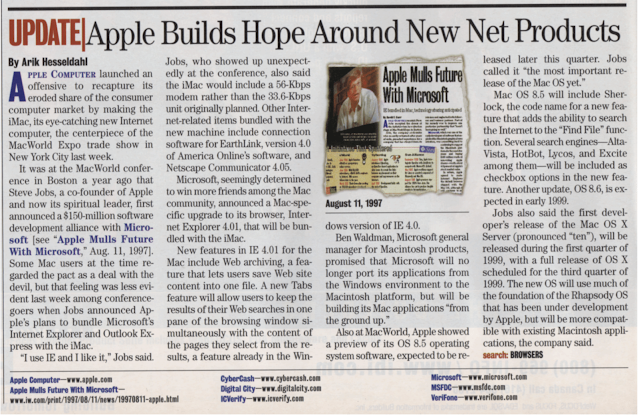